At the southernmost tip of Japan, Naha Port is the gateway to Okinawa Prefecture for both travelers and goods. When the region was united as the Ryukyu Kingdom by Sho Hashi in the 15th century, the port prospered as a channel of trade among Japan, China, Korea, and Southeast Asia and subsequently became the primary base for Ryukyu trade.

Before Naha Port (present day Naha Wharf ) was designated as the base for trade by Sho Hashi, Eiso, King of Chuzan (1229-1299), had built an official mansion (Tomari Goten ) and public storehouse (Oshima Storehouse) at Tomari Port (present day Tomari Wharf) to serve as the royal government’s port, from which he opened trade with China in the 14th century.

Extensive development of the port’s facilities began in 1907, and by 1915, the port was large enough to moor three 1,200-ton class vessels at the same time. 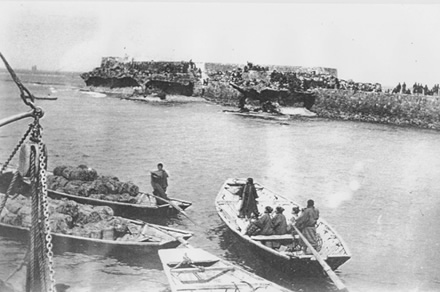 Seeing off passengers at Mi Gusuku Castle (present day Naha Wharf) circa 1927. Before the pier was constructed, passengers and goods were carried by ferry boat to ships docked at port.

However, Naha Port was destroyed in air raids by U.S. forces in 1944, and the facilities were rendered unusable.

In 1954, the northern piers of Naha Port were returned to be managed and operated by what was then the government of the Ryukyu islands , and Tomari Port went to Naha City in the same way. As the Okinawan economy recovered after the war, the ports were handling increasingly large volumes of cargo each year. By 1965, the existing facilities could no longer handle the cargo coming in, and expanding the ports and harbors became a matter of urgency.
Plans to construct Shinko Port in the Aja district were drawn up, and construction began in 1969. In 1971, three quay wall berths with a depth of 7.5 meters and one quay wall berth with a depth of 6.0 meters were completed, and the port opened for service.

When the ports were returned to Japan in 1972, the northern piers of Naha Port, Tomari Port, and Shinko Port were unified under Naha City management. With the integration of these three harbors, Naha Port was designated a major port.

The Naha Port Development Plan, enacted in 1974, introduced plans for Urasoe Wharf, which would improve distribution infrastructure connecting Okinawa with mainland Japan and neighboring countries in Asia, as well as connecting the main islands within Okinawa. With the construction of Naminoue Bridge, Tomari Bridge , and Naura Bridge, port development would contribute significantly to daily life in local communities and promote industry and tourism, as well.
In the mid-1980s, it became necessary to adapt to changes associated with the expanding infrastructure for the distribution of goods, such as rising cargo volumes, the increasing size of ships, and shifts in forms of transportation. In addition, given the seaside location of the ports in Naha, the neighborhood was expected to play a role both as an industrial base and an area for recreation and relaxation for local residents.
In order to meet the needs of the time, the Naha Port Development Plan was revised in 1988, highlighting expansion of Shinko Wharf piers and enlarging the Urasoe Wharf northward.
This was followed with improvements focused primarily on adapting to the shift toward container shipping, redeveloping Tomari Wharf, developing the seaside park, and refitting the harbors for small ships. Tomarin (the Tomari port building) was completed in 1995, and the Tsuji side of Naminoue Beach opened in 1998, creating a popular recreation area in Naha Port. At Shinko Wharf, the No. 1 Berth opened for international containers in 1997, and the first quay cranes came into use in 1998.

In April 2002, the management and operation of Naha Port was transferred from Naha City to the Naha Port Authority, a joint body including the Okinawa Prefectural government and the Naha and Urasoe municipal governments. 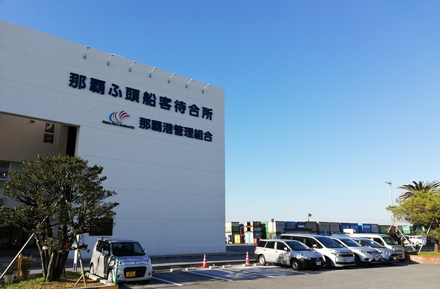 In 2003, based on the Okinawa Promotion Plan, the focus shifted to expanding Naha Port to handle international logistics. The Naha Port Development Plan was therefore revised to reflect a basic policy of enhancing the port’s international logistics functions, promoting international tourism and the resort industry, restructuring the port’s functions, fostering and protecting the environment, and ensuring safety and security.
Based on this revision, Naha Port was expanded in 2004 to include the installation of the No. 2 quay crane in the Shinko Wharf area. In 2006, the No. 2 Berth for international containers with a depth of 13 meters was constructed and the law on Special Zones for Structural Reform was utilized to privatize the Naha Port International Container Terminal (operated by Naha International Container Terminal, Inc.).
From 2014 to 2015, the No. 3 and No. 4 quay cranes were added to the two existing quay cranes, as well as a two-unit, one berth system with minimal maintenance requirements. Today, Naha Port International Container Terminal services regular international container routes (to/from North America, nearby sea routes, and Southeast Asia).
The opening of the Airport Access section of Rinko Doro Road and Naha Nishi Road (Naha Umisora Tunnel) in 2011 and the Urasoe section of Rinko Doro Road in 2018 strengthened logistics between Naha Port and the loading and supply area. These moves also improved accessibility between Naha Port and Naha Airport, as well as a number of other locations throughout the prefecture.
Following the provisional use of Tomari Wharf berths for large passenger ships, the Naha Cruise Terminal began operations to accommodate cruise ships in April 2014. With this new terminal, passengers were now able to disembark as soon as their ship arrived at port, helping to boost tourist convenience and satisfaction.